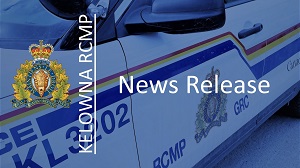 West Kelowna RCMP officers located one adult male victim suffering from an apparent gun shot wound. The male victim was transported to hospital by BC Emergency Health Services for treatment of what are believed to be non-life threatening injuries.

Officers remain on scene conducting neighbourhood canvassing, speaking with witnesses, and gathering physical evidence, states Cpl Jocelyn Noseworthy, Media Relations Officer for the Kelowna RCMP. The investigation is still in it’s early stages and officers will be in the area for an undetermined period of time.

No further information is being released at this time, but West Kelowna RCMP are urging anyone who witnessed or has knowledge of this crime to come forward to speak with police immediately.

Anyone with any additional information is asked to contact the West Kelowna RCMP General Investigation Section at 250-768-2880. Or remain completely anonymous by calling Crime Stoppers at 1-800-222-8477 or by leaving a tip online at www.crimestoppers.net