Impairment, speed and no mechanical failure in fatal crash from March 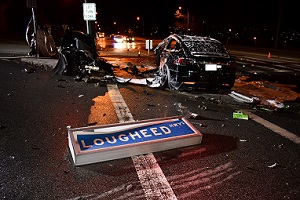 A Coquitlam RCMP investigation has found that impairment and speed, not mechanical or computer failure, were the decisive factors in a fatal, single-vehicle crash earlier this year involving a Tesla.

The crash happened on Lougheed Highway near Alderson Avenue just before 1:00 a.m. on March 18, 2019. The driver and lone occupant of a Tesla was killed when the vehicle lost control and left the road.

A thorough police investigation, led by Coquitlam RCMP’s Criminal Collision Investigation Team (CCIT), has determined that the driver had more than 3 times the legal amount of alcohol in his system and was travelling over 150 km/h in a 60 km/h zone.

Due to Privacy Act considerations, the name of the driver will not be released.