Search warrant at a Port Coquitlam residence leads to over 32,000.00 dollars of stolen property, drugs and cash 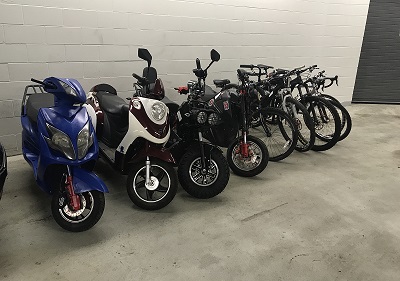 During the execution of a search warrant, Coquitlam RCMP Uniformed Crime Reduction Unit recovered stolen property, drugs, and cash with a total value in excess of 32,000 dollars.

On October 21, 2020, Coquitlam RCMP received a report of what appeared to be live ammunition stored improperly along with high-powered pellet guns, and a large bag of suspected crystal methamphetamine during an eviction in the 1600-block of Renton Avenue, Port Coquitlam.

Police attended the residence and observed a black bike on the curb that resembled a bike stolen, earlier in the month. The suspects returned to the house a short time after police arrived, and were arrested for multiple offences including carrying a concealed weapon.

A 42-year-old man and a 21-year-old woman are facing the following charges:

The evidence seized during the search included:

During Crime Prevention Week, police want to remind people to keep all personal property locked up and out of sight to prevent theft.

If you see a crime in progress, call 911 immediately. To report a crime that has already occurred call your local police. To reach the Coquitlam RCMP non-emergency line, please call 604-945-1550 or report stolen items under 5000.00 dollars on our online reporting tool https://ocre-sielc.rcmp-grc.gc.ca/coquitlam/en