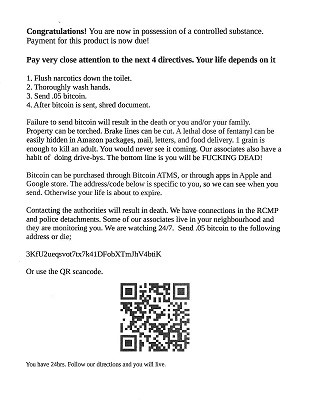 Police are warning the public about a threatening letter scam that has had numerous instances in the Port Coquitlam and Coquitlam areas over the past week that requests the receiver of the letter to send Bitcoin by scanning a QR Code at the bottom of the letter before bad things happen to them, which we have attached a copy of for members of the public to be able to recognize it. In some instances a white powder has been found loose in the letter when the receiver has opened the letter.

Since January 25 2021, Coquitlam RCMP have received numerous reports and are currently investigating the letters with the help of their partners at Canada Post. The letter threatened recipients of hiding fentanyl in Amazon packages and included death and property threats if the recipient did not send 0.05 bitcoin. Coquitlam RCMP believes this letter to be a mass production sent to multiple addresses, as all letters appear identical.

None of the letters have resulted in anyone being harmed from the white powder inside the letter, however the public can continue to keep themselves safe by doing the following:

Should you have received one of these letters already or receive the letter in the future please contact the Coquitlam RCMP.

Fraudsters often attempt to pass themselves off as someone in authority. They may impersonate a police officer or an employee of a business, financial institution or government agency. Fraudsters use a variety of tactics, but their ultimate goal is the same-to take your money, states Constable Deanna Law, Coquitlam RCMP Media Relations Officer.

Signs of a Scam:

Whether you made a payment or not, report scams to the Canadian Anti-Fraud Centre at 1-888-495-8501 or www.antifraudcentre.ca. If you made a payment, contact your financial institution that transferred the money, and report the incident to your local police. Coquitlam RCMP’s non-emergency line is 604-945-1550.