Today, two detachments in the Lower Mainland (Coquitlam RCMP and North Vancouver RCMP) will add Hate Motivated Incidents (HMI) to their roster of reportable incidents as a pilot project via the Online Crime Reporting tool which is available at most detachments throughout BC.

Hate Motivated Incidents are not defined as a criminal offence. These incidents are defined by an encounter where a person is targeted by another based on motivation of hate or suspected motivation of hate. This could include hate-motivated correspondence, someone being treated poorly, hateful speech or insults towards a person each based on race, gender or sexual orientation.

A Hate Motivated Crime is a criminal offence when anyone inciting violence or threats towards an identifiable group, vandalism to a home with hate graffiti or damage to a place of worship, and physical assault based on race or sexual orientation. This offence cannot be reported online.

Detachment’s have experienced an increase in public complaints over the past two years which involved examples of incidents motivated by hate based on race, gender or sexual orientation, says Constable Deanna Law, Media Relations Officer for the Coquitlam RCMP. We wanted to offer an additional way to report Hate Motivated Incidents, regardless of whether or not it brings us to the point where we have the authority to make an arrest. Reporting these behaviours are very important for public safety. We are actively working at streamlining our police operations, keeping up with technological advances, and responding to concerns from the public.

As a data driven agency, it is hoped the additional option to report Hate Motivated Incidents online will encourage reports that can guide the deployment of members and teams and improve on our response to the public. If this pilot project is successful, the ability to report Hate Motivated Incidents will be made available to other communities policed by the RCMP across British Columbia in a phased approach.

Citizens with a valid email address can report Hate Motivated Incidents that occurred in Coquitlam, Port Coquitlam, Anmore and Belcarra. Below are the incident types that can be reported online: 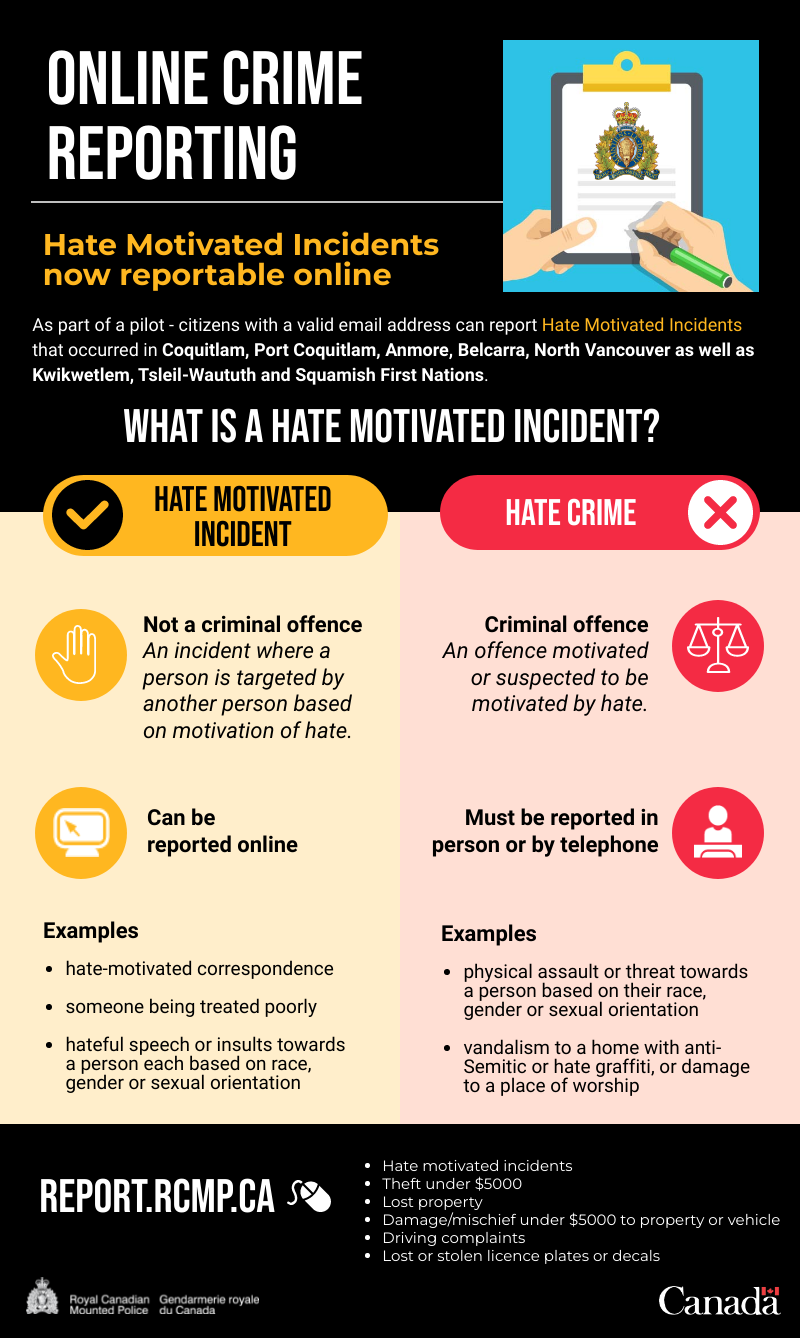