Coquitlam RCMP have located and returned the totem pole which was reported stolen on October 12, 2022 from kʷikʷəƛ̓əm (Kwikwetlem) First Nation located at 10 – 65 Colony Farm Road in Coquitlam.

On Wednesday, December 28, 2022, Coquitlam RCMP were advised that the stolen totem pole had been left behind after a tenant moved out of a residential basement suite in Chilliwack. With the assistance from Upper Fraser Valley Regional RCMP, Police safely located the totem pole.

This is the outcome we hoped for but did not expect, said Corporal Alexa Hodgins of Coquitlam RCMP. We are really happy that we were able to return the totem pole, as we understand the significant loss and sentimental value that it held within the community.

We would like to thank the Coquitlam RCMP, the Upper Fraser Valley Regional RCMP and the general public for their combined efforts in helping to locate and retrieve the stolen totem pole from the Nation. The carving of the owl was of important cultural significance to the Nation and we are very grateful to have it back here in our community, Chief and Council, kʷikʷəƛ̓əm First Nation. 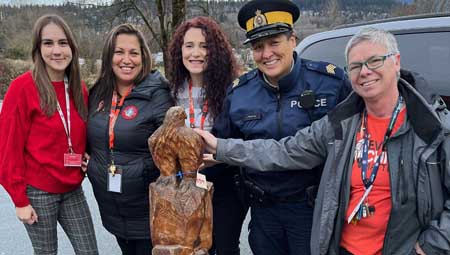 We would like to thank the public for their assistance, as we would not have been able to safely locate this totem pole without their help, said Corporal Alexa Hodgins. We would also like to thank our partnering agencies at the Upper Fraser Valley RCMP Regional Detachment for assisting Coquitlam RCMP by retrieving the totem pole.

Anyone who has any information, witnessed this incident or may have information as to how it ended up in Chilliwack are asked to contact the Coquitlam RCMP at 604-945-1550, and quote file number 2022-27539.